DLC: The Huangpu River is a 113 kilometers-long river flowing through Shanghai, China that was first excavated and created by Lord Chunshen, one of the four lords during the Warring States Period (475 BC – 221 BC). From the mid-19th century to the end of the 20th century, due to its unique geographical location and vast spatial advantages, the east bank of the Huangpu River was an ideal location for docks, stacks, warehousing and other sites and was also the best choice for large factories such as shipbuilding. Eventually, bridges and tunnels were needed for more efficient access.

In October 1993, Yangpu Bridge, spanning over Shanghai’s Huangpu River opened. It is one of the longest cable-stayed bridges in the world and connects Puxi’s Yangpu District with Pudong. Originally grey and unpainted, Yangpu Bridge was coated red for the city’s millennial celebration and has remained its iconic flame color to this day. Currently, Yangpu Bridge Park is only part of a wider vision to promote a vibrant urban life on the banks of the Huangpu River. Recently the municipality of Shanghai has commenced a large scale reconstruction of the east bank of the Huangpu River that will stretch for 21 km and open the landscape of Shanghai onto the river’s edge. By establishing a new living interface between neighborhoods and the river, a new long series of public spaces hosts linear paths: a discovery path, main path and sports path that help animate the river bank and create an urban setting within a natural environment for everyday activity along the 21 km of the East Bank. This has created a new breath of life on the previously unoccupied industrialized river banks by giving high visibility and a strong identity to the Huangpu water edge and its new connection to the city of Shanghai and its symbolic skyline. 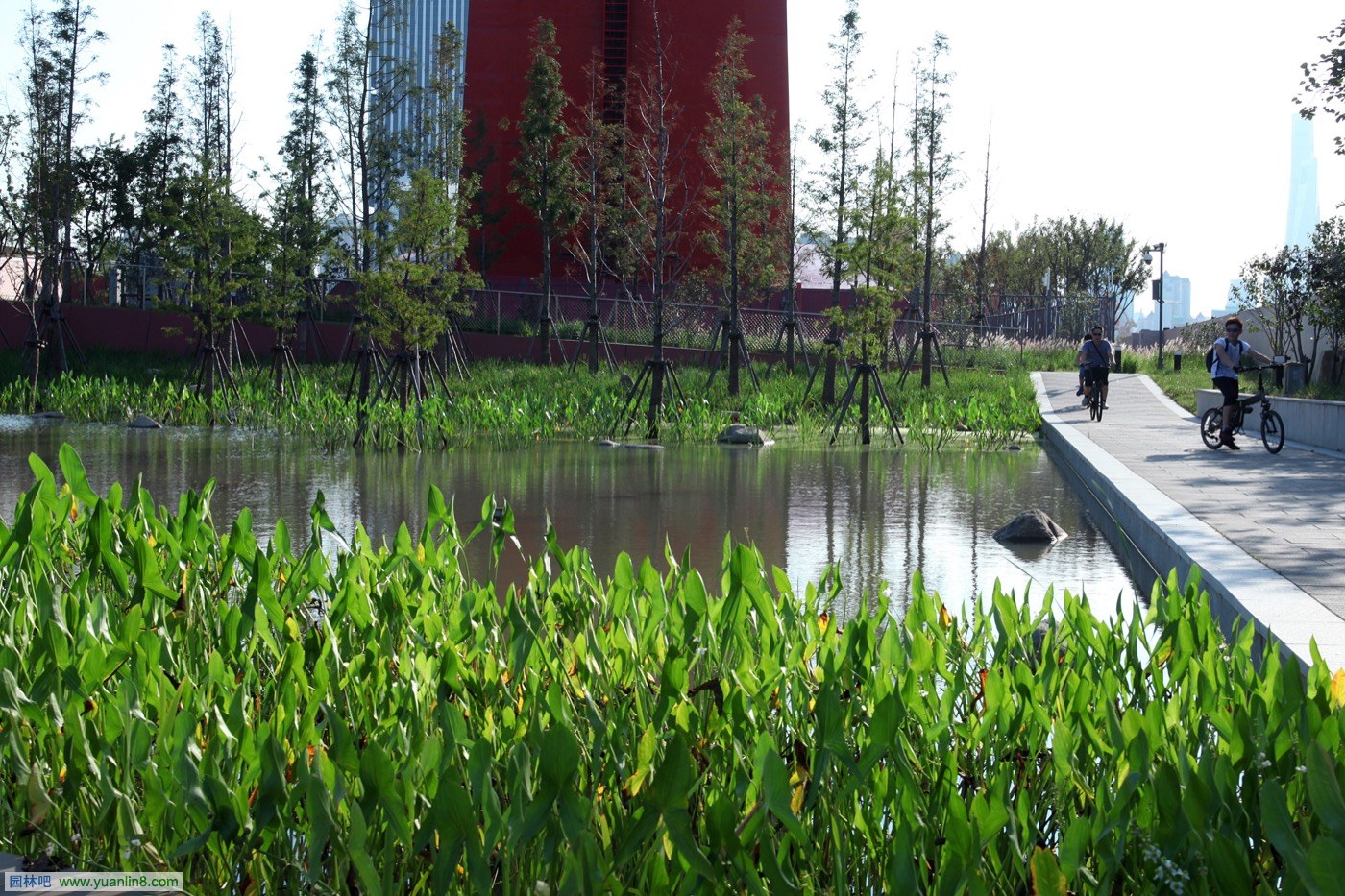 为了应对这一挑战，‘；连接’；，斜离开形式‘；火焰红色’；混凝土墙灵感来自于桥梁的力量和强度，是梯田远离河流’；的边缘，作为一个45公里的黄浦江重建防洪倡议的一部分。多层层叠式花园由人行天桥和坡道连接而成，这些人行天桥和坡道结合了总体规划’；的线性路径，一旦进入公园，就继承了杨浦大桥的材料和颜色，从而将大桥作为一个整体融入公园。沼泽和草地，起伏的草坪上有红色的乌桕树（乌桕皮脂）、日本血草（白茅&&x2018；红莓&&x2019；）和多花草（木兰贝根毛细血管），作为杨浦大桥的一部分，两个圆形剧场和一个河畔小径网络在大桥底部周围形成了各种地形，反之亦然。
To answer this challenge of ‘connections’, oblique off-form ‘flame red’ concrete walls inspired by the power and strength of the bridge are terraced away from the river’s edge as part of a 45 km Huangpu River Restructuring Flood Control Initiative. Multi-levelled cascading gardens are connected by pedestrian bridges and ramps that incorporate the master plan’s linear paths which, once entering the park, inherit the material and color of the Yangpu Bridge and thus integrate the bridge into the park as one. Marsh and meadows, undulating lawns with red-themed Sapium trees (Sapium sebiferum), Japanese Blood Grass (Imperata cylindrica ‘rubra’) and Muhly Grass (Muhlenbergia capillaris), two amphitheatres and a network of riverside paths create various topographies around the base of the bridge as part of Yangpu Bridge and vice versa. 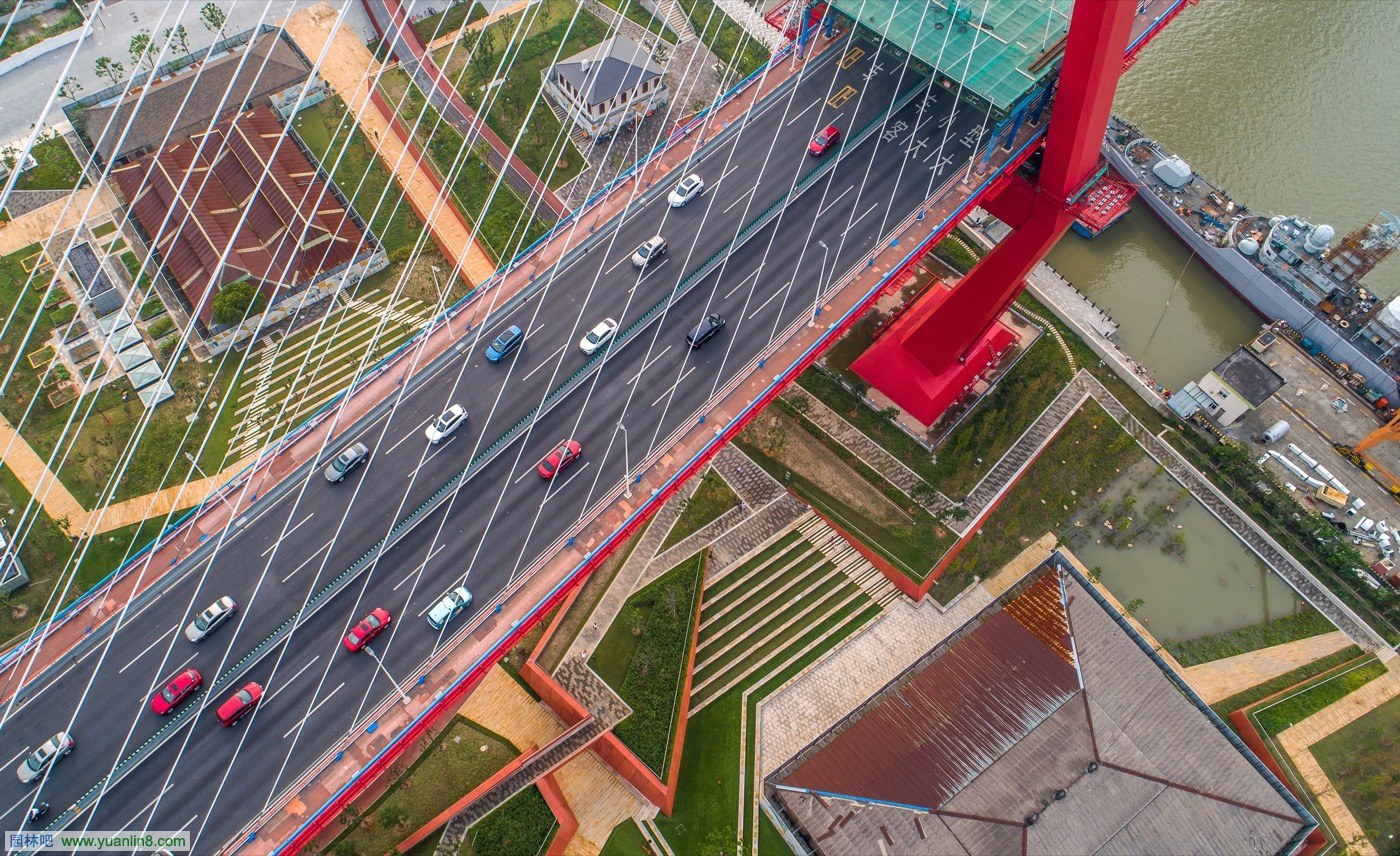 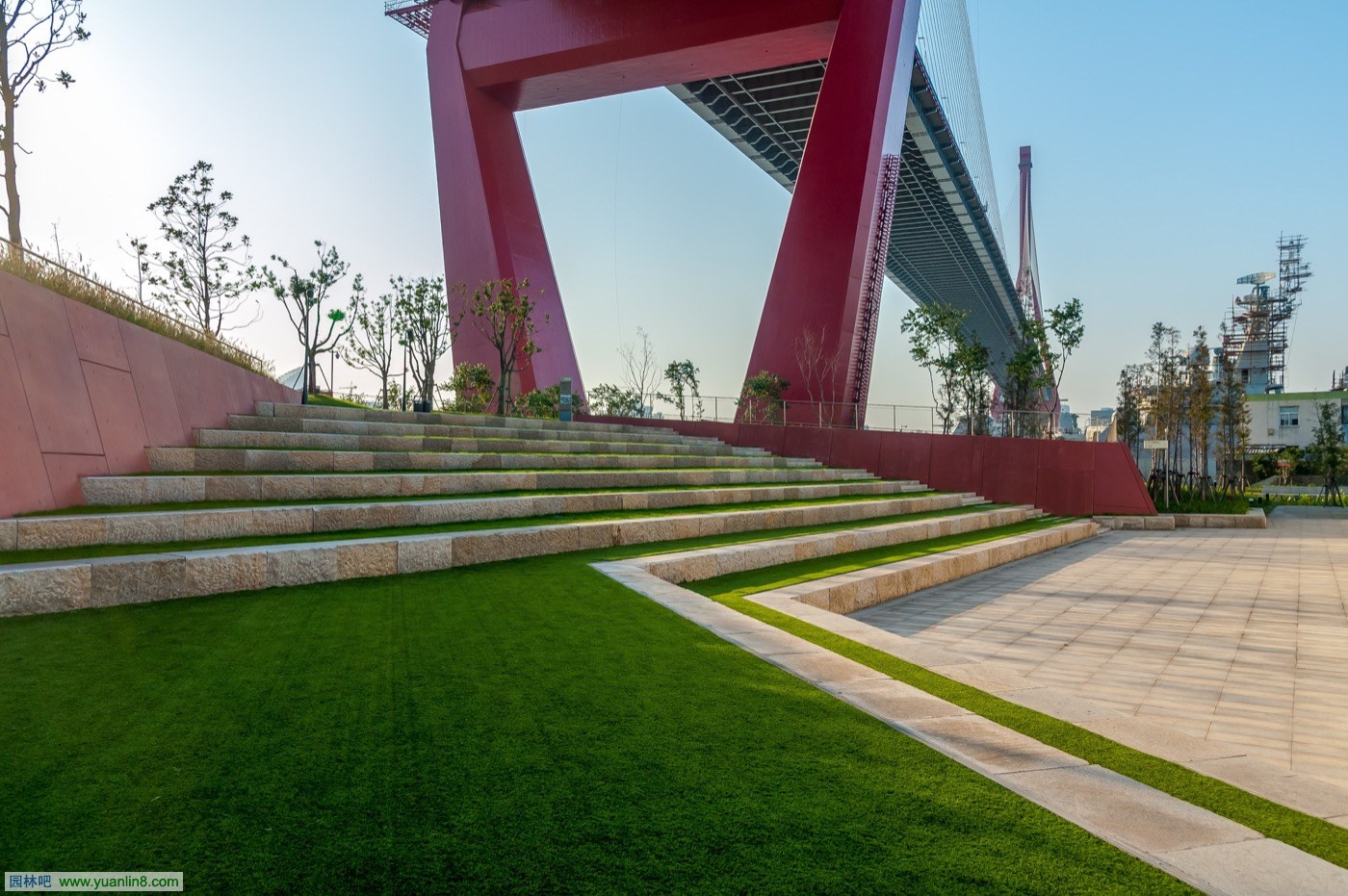 Two early 20th century wooden warehouse structures that exist under the bridge are still under renovation and are proposed to be used as part of a family park learning center. This will include The Yangpu Bridge Children & Young Adult Learning Center with a café, Young Children Biodiversity Activity Center, Yangtze Delta & Wetland Study Area and an indoor/outdoor adventure and discovery playground with amphitheater. The education and entertainment activities the old warehouse will offer as a learning center narrate the ecological and economic value the Huangpu River and its bridges have with a modern evolving Shanghai. This helps support awareness that a marvel of engineering can work in unison with ecology and education. 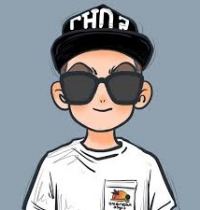