Ramboll Studio Dreiseitl:被确定为新加坡裕廊湖花园开发的第一阶段和第三国家公园，湖滨花园是一个53赫克雷遗址，旨在恢复淡水沼泽森林的景观遗产，作为休闲和社区活动的画布。该开发项目被设想为一个“；人’；的花园”；可供社区所有阶层使用，是一项有意识的努力，以恢复该地区曾经独特的自然。
Ramboll Studio Dreiseitl: Identified as the first phase of development of Jurong Lake Gardens, Singapore’s third national garden and the first in the heartlands, Lakeside Garden is a 53-hecare site that looks to restore the landscape heritage of the freshwater swamp forest as a canvas for recreation and community activities. The development is envisioned to be a “people’s garden” accessible to all segments of the community and is a conscious effort to bring back the nature that was once unique to the area. 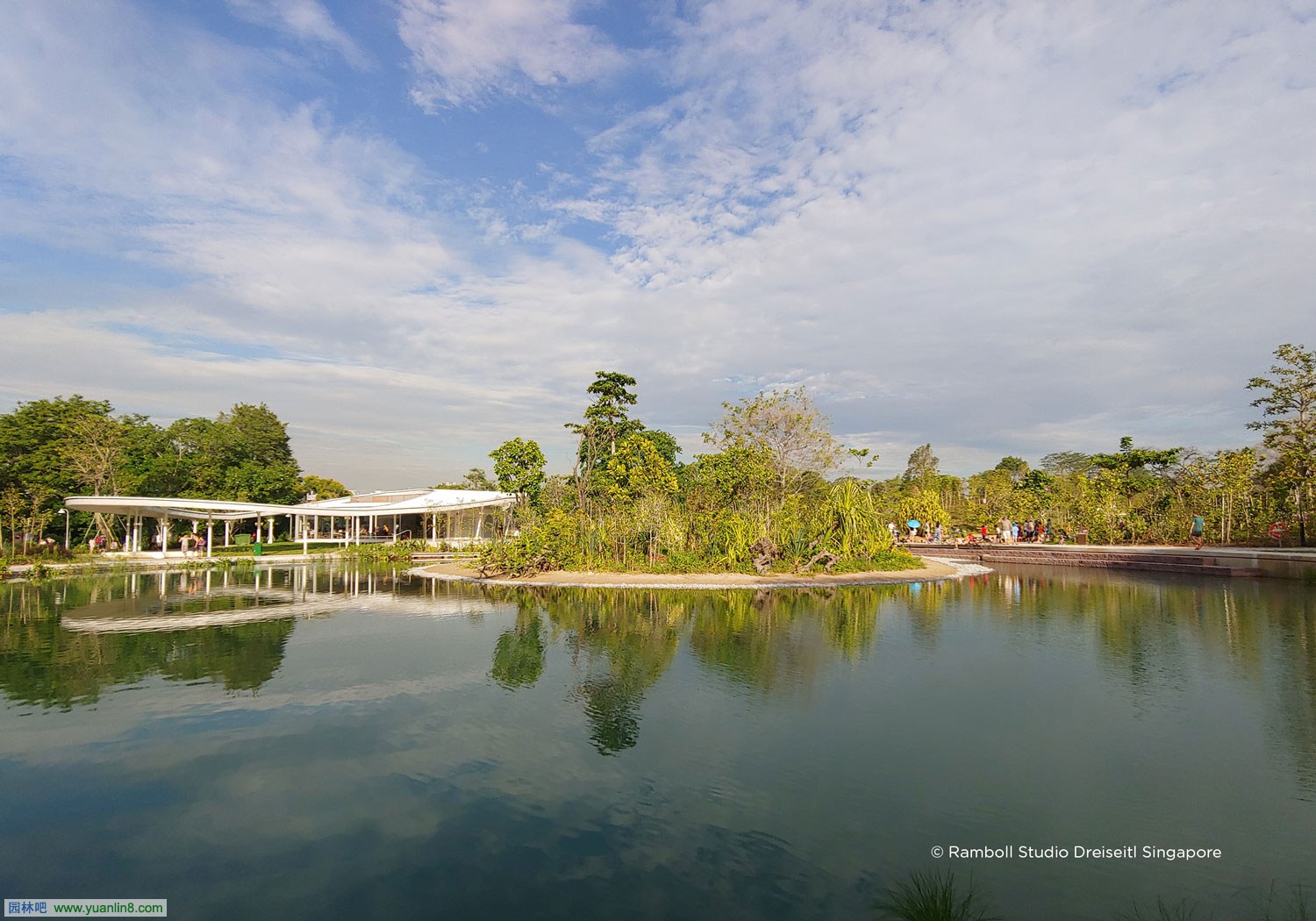 Before the early-mid 1900s, the area was a swamp that was teeming with flora and fauna.

淡水沼泽、林地和草地是构成花园的主要生态区。然后，生态区被进一步细分为关键的栖息地空间，每一个都有独特的特点和适合各自动物群的植物类型。现有树木3000余株，移栽200余株。现存的大树如榕树和黄色火焰被精心保存，为野生动物和生物多样性提供了一条连接走廊。特别挑选吸引鸟类、蝴蝶和蜻蜓的乔木和灌木，提供食物来源和筑巢机会，确保有一个充满活力的栖息地和丰富的生物多样性。像犀鸟、浅黄色的鱼枭和水獭这样的稀有物种被发现是这个花园的常客。
The freshwater swamp, woodlands and grasslands are the primary ecotones that makes up the garden. The ecotones are then further broken down into key habitat spaces, each with unique characteristics and plant types that are suited for the respective fauna. Over 3000 existing trees are preserved within the site, with 200 trees transplanted. Existing big trees such as banyans and yellow flames are preserved carefully, which provide a connected corridor for wildlife and biodiversity. Bird, butterfly and dragonfly attracting trees and shrubs are specially selected to provide food source and nesting opportunities, ensuring a vibrant habitat with rich biodiversity. Rare species such as hornbills, buffy fish owls and otters are spotted to be regular inhabitant of the garden.

为反映该地区的自然历史，阿尔斯通岛主要种植有阿尔斯通铲形植物，其状况受到裕廊湖水位变化的极大影响。该岛的情况类似于淡水沼泽，因为当裕廊湖的水位变化时，该岛经常被淹没。淡水沼泽森林的茂密植被和几乎永久性的淹水条件导致了一个独特的动植物栖息地的发展。自19世纪初以来，新加坡失去了许多淡水沼泽森林，这主要是由于菠萝和橡胶种植园等商业农业的开发和土地转换。该地区在1961年发展成为工业区之前是红树林沼泽森林。
Planted predominantly with Alstonia spatulate to reflect the natural history of the area, the Alstonia Island’s conditions are greatly influenced by changes in the water level of Jurong Lake. The island has conditions similar to that of a freshwater swamp, as it is constantly flooded when there are changes in Jurong Lake’s water levels. The dense vegetation and almost-permanently waterlogged conditions of the Freshwater Swamp Forest have led to the development of a unique habitat for flora and fauna. Singapore has lost many of its freshwater swamp forests since the early 1800s, largely due to development and land conversion for commercial agriculture, such as pineapple and rubber plantations. The area was a mangrove swamp forest before it was developed into an industrial estate in 1961. 作为一系列的编织水道，加起来高达900米，环绕着树木的岛屿，尼拉姆溪流以前是一个直的混凝土排水沟，从道路外面通往湖边。开挖深度高达6米，采用多种生物工程技术对河堤进行精细工程设计，确保边坡稳定。尼拉姆河两岸种植了热带河岸森林中常见的树种，如Dillenia、Syzygium、Diospyros、Saraca和Barringtonia。沿着溪流和弯曲处也可以找到一簇簇的蓝莓树（白柏）。
As a series of braided waterways that adds up to 900m winding around islands of trees, Neram Streams was previously a straight concrete drain that led from the road outside to the lake. With excavation depth as much as 6m, the streams banks are precisely engineered through various bioengineering technique to ensure slope stability. The banks of the Neram Streams are planted with collections of tree species commonly found in tropical riverine forests, such as the Dillenia, Syzygium, Diospyros, Saraca and Barringtonia species. Clusters of Neram trees (Dipterocarpus oblongifolius) can also be found along the streams’ bends.

The picturesque Grassland sits in between the Garden streams and the wooded areas. It forms part of the intertidal habitat, transiting from dry grassland of the inland area towards wet grasslands at the shore edge. With over 3.5 hectare in size, it aims to create a transition that provides refuges areas for both migratory and resident avian population, as well as food sources and nesting grounds. A series of mounds are located at the periphery of the vastly open grasslands, where 3 birdhides are located at these mounds for bird watching activities. At dusk, grassland birds are seen to be hiding amongst the tall waving grasses, jumping from cluster to cluster, or flying in a flock against the sky in the vast grasslands. Besides being a hotspot for biodiversity, the soft yellow hues of the Grassland have also become the most popular spot for Instagram-worthy photos. The charming, alluring space is one of the rare spots in urbanised Singapore that is shared by both humans and wildlife in a non-intrusive manner.

Rooted in the middle of the open grasslands amongst the tall grasses is a sculpture in the shape of a bare tree made from recycled iron reinforcement bars salvaged from demolished steel-reinforcement from the site’s old pathways. Named as the Lone Tree, it is not just an artistic sculpture piece. This tree aims to serve similar ecological function as a snag or a dead tree in a wild meadow. This bare tree form becomes the perfect resting locations for either a feeding predator that is scouring the horizon for his meal, or temporary resting points for a flock of migratory bird of their journey. With long grasses waving in the foreground, the Long Tree with a perfect sculptural form is also found to be one of the most photogenic element within the garden. 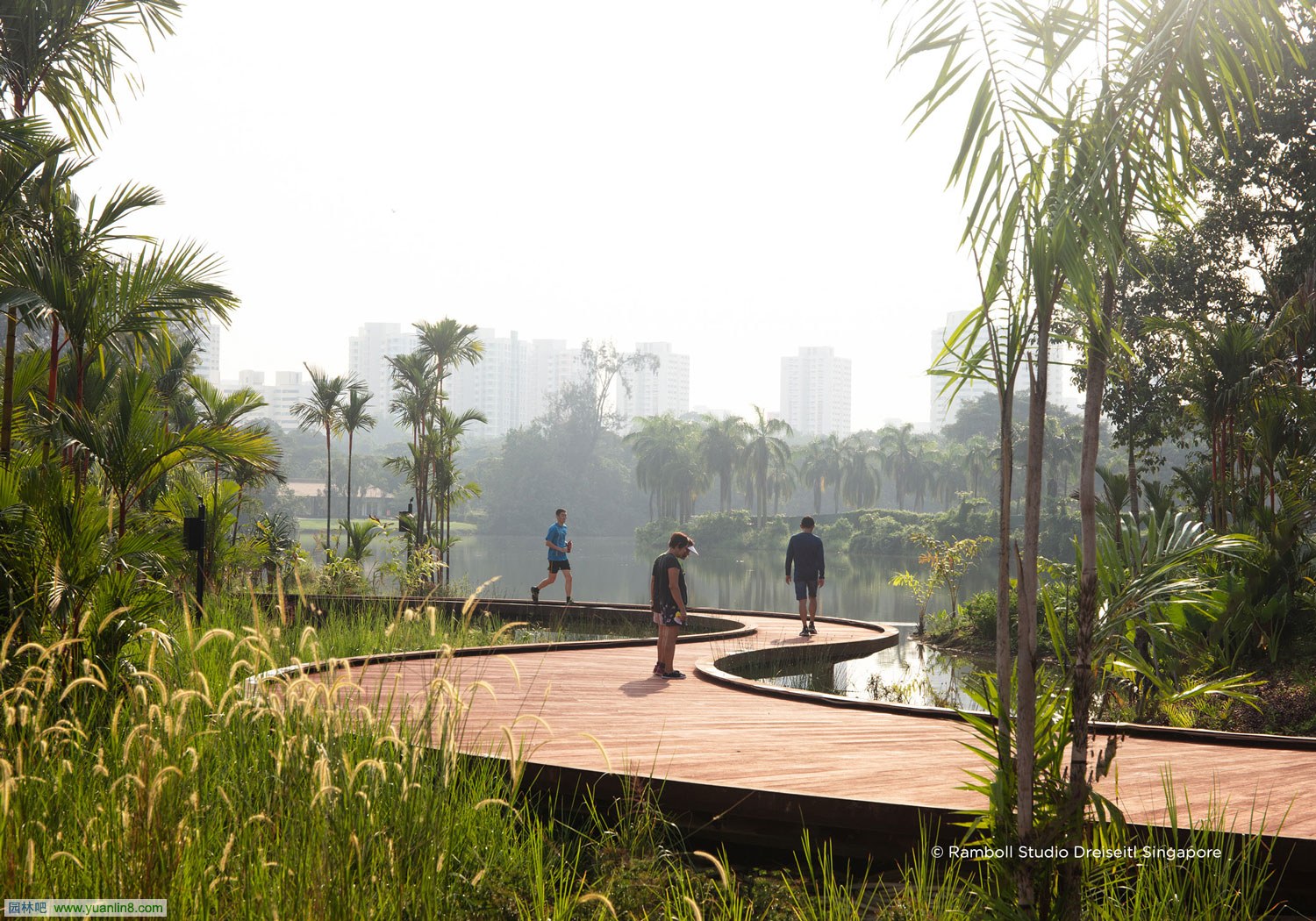 沿着水的边缘蜿蜒而行，300米无障碍的Rasau步行道为游客提供了靠近海岸线自然的机会。蜿蜒曲折的棕榈岛和现有的树木，宁静的草原和宁静的湖畔风景在不同的景点被揭示。经过精心设计的斜坡边缘，木板路位于具有不同水深的过渡潮汐边缘内。拉索步行道沿线的植物，如密封蜡棕榈、尼邦棕榈，都适合应付不断的洪水。晚上，木板路将沿着边缘发出柔和的辉光，突出蜿蜒木板路的曲率。
Meandering along the water’s edge, the 300m barrier free Rasau Walk offers visitors the opportunity to get up close with nature along the shoreline. Winding around islands of special palm collection and existing trees, moments of the tranquil grasslands and serene lakeside scenery are uncovered at various viewing spots. With a carefully engineered slope edge, the boardwalk sits within the transitional tidal edge that has varying water depths. Plants along Rasau walk such as the sealing wax palms, nibong palms, are adapted to cope with constant inundation. In the evening, the boardwalk will be illuminated with a soft glow along the edge, accentuating the curvatures of the meandering boardwalk.

Lakeside Garden is home to the largest children’s nature play garden in the heartlands. At Forest Ramble, a biophilic play space, children are encouraged to mimic the actions and motions of animals that inhabit freshwater swamps which were common in the Jurong Lake area. They can hop about like a frog on the trampolines at the Frog Play zone, cruise in the air on a zipline and pretend to be a Heron flying from one nest to another, test their balance and agility by bouncing from one platform to another like a Squirrel, or glide down the slithering slide at the Snake Play zone. At this biophilic nature playground, they are also encouraged to come out with their own way of pretending to be any animal imaginable that looks to conquer the place and find their own path to an adventure within the garden. To add to the play experience at Lakeside Garden, Clusia Cove is a fascinating, interactive water playground where children can experience the water movements that mimic the tidal pattern, surface ripples and directional currents similar to coastal shores. Children can put on their cutest swimwear, build sandcastles, and feel the currents tickle their shins at Clusia Cove, much like a day out at the beach+. A three-hectare closed-loop water recycling system that treats water naturally is used for the water playground. Cleansing biotope which serves as a natural water treatment system and UV treatment are used to disinfect the water before being pumped into this play area. The cleansing biotope makes up of a series of cells filled with sand filter media, as well as semi-aquatic plants which absorbs excess nutrients from the water. It serves as a natural water treatment system before finer filtration and disinfection take place in the underground UV control room.

To improve the drainage system in the garden, Water Sensitive Urban Design (WSUD) elements such as vegetated swales and gravel swales are introduced as drainage conveyance measures. As a result, 12,000m concrete drain was demolished, and a new 8,500m concrete drainage and 4,750m swales and streams was constructed. 100% of the catchment is conveyed through WSUD elements drainage before being released to Jurong Lake. Three concrete drains were transformed into completely naturalised streams, which provides new spaces for community and ecology along the streams.