In Bangkok’s crowded neighborhood, the owner wanted to convert his abandoned townhomes into a new long stay hotel. Located in a small dead end alley, the site basically has no view to look at. Instead we turned our goal into how to create more comfortable living conditions for hotel residents by reducing the site’s temperature by a few degrees compared to Bangkok’s rising heat just outside the property. A few years ago, we got a commission to design a landscape for a new hotel, in one of Bangkok’s busiest neighborhoods. The site was quite compact, with abandoned townhomes on both sides, facing each other. These structures must be kept and transformed into hotel rooms, with windows looking right at drop-off area. The new lobby and restaurant were to be added in between both structures, making the site even more crowded.

Luckily, there is one existing tree right in front of the property’s wall. The tree is Ficus Benjamina Linn, with beautiful branches and a lot of hairy roots. Considering its location, it probably grew here by accident decades ago, and the owner’s grandparents just let it be there. 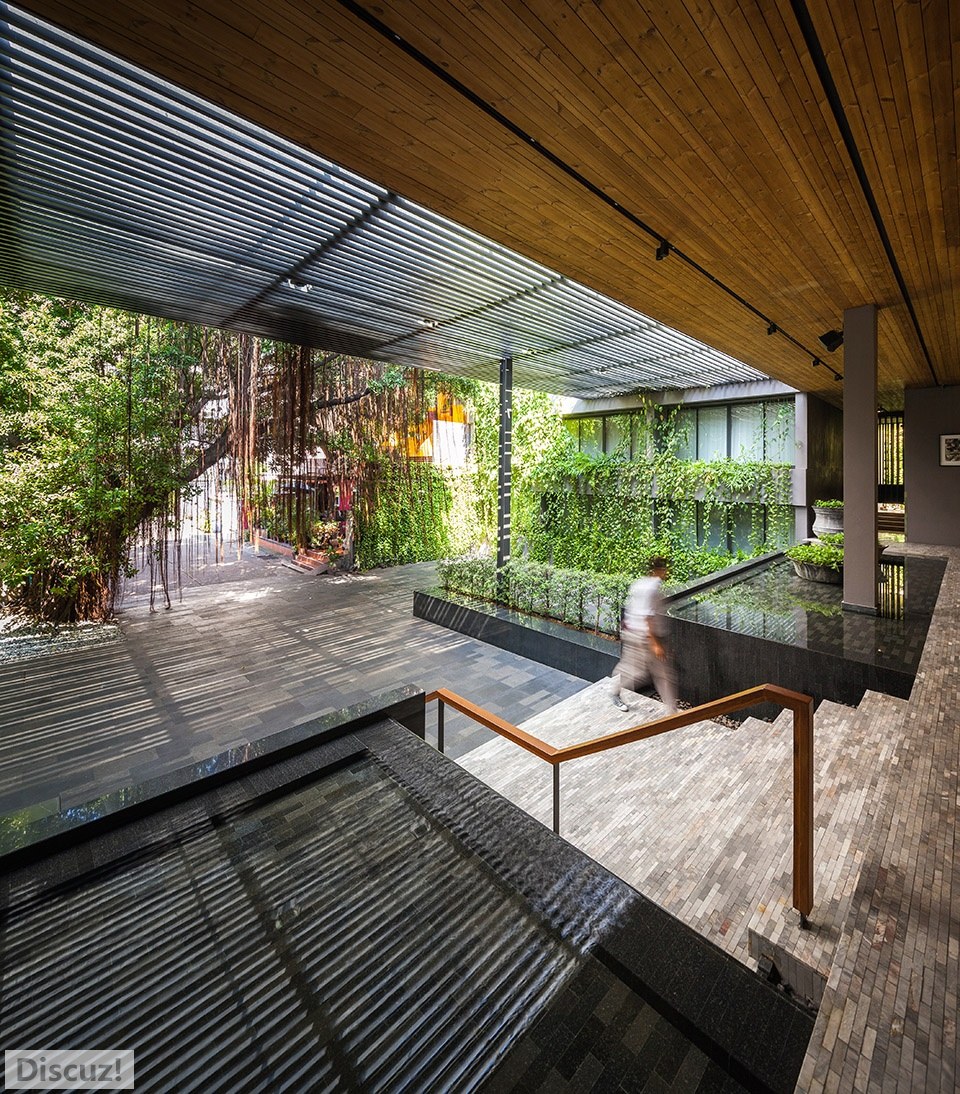 ▼垂叶榕，有着美丽的枝干和许多垂下的毛茸茸的气根，Ficus Benjamina Linn, with beautiful branches and a lot of hairy roots We decided from the very first day that this tree would be the main feature of the hotel. The owner had doubt at first, thinking about cutting or removing the tree, because it made the construction process much more difficult. Thai people normally do not plant a Ficus tree at homes. They think it belongs to temples. We had to convince the whole team that the tree was very critical for our landscape. First, the hotel basically had no view to look at, which made it very hard to attract their potential guests. This tree would be our ‘View’. From everywhere in the property, you could see this wonderful tree.

▼将榕树作为酒店的特色，the tree as the main feature of the hotel Second, this hotel was not a typical hotel. The owner wanted to build a long stay hotel here to serve the neighbor hospital’s international patients and their families, who had to be treated for weeks or months. So we looked at the project as their second home instead of their hotel. Because of Global Warming, Bangkok’s temperature is also rising every year. We wanted to create more comfortable living space by reducing the temperature by a few degrees inside the property. The tree’s gigantic shade would significantly help. Also in Thai, the phase ‘Rom Po Rom Sai ’ (literally means ‘Under the Ficus shade’) means someone who protects you and makes you feel safe. Finally the owner agreed to keep the tree, including all of its hairy roots. In order to reduce the temperature, just keeping the tree was not enough. Tall green walls were strategically replaced old concrete walls. Epipremnum aureum were planted in a series of stacked planters, watered by drip irrigation system to safe water consumption. From inside the restaurant, hotel residents would see these green façade instead of typical concrete walls. They can also sit comfortably outside, because the green wall significantly helped reducing the heat as well.

▼餐厅外用餐区，the seating area outside the restaurant ▼餐厅内用餐者视角，a view from inside the restaurant With no view from each room, curtains were rarely opened. Thai herb, Thunbergia laurifolia Lindl. was planted just outside the windows. This fast growing herb covered most of the windows within months, acting as living curtain to filter outside heat from entering the rooms. Finally the pool was placed on top of restaurant’s roof. This is the only place where hotel residents would fully get sunbathing. However, water in the pool also helped reducing the heat for the diners below. After the completion, the hotel surprises every visitor, who did not expect this hidden oasis just right off a busy Bangkok neighborhood. 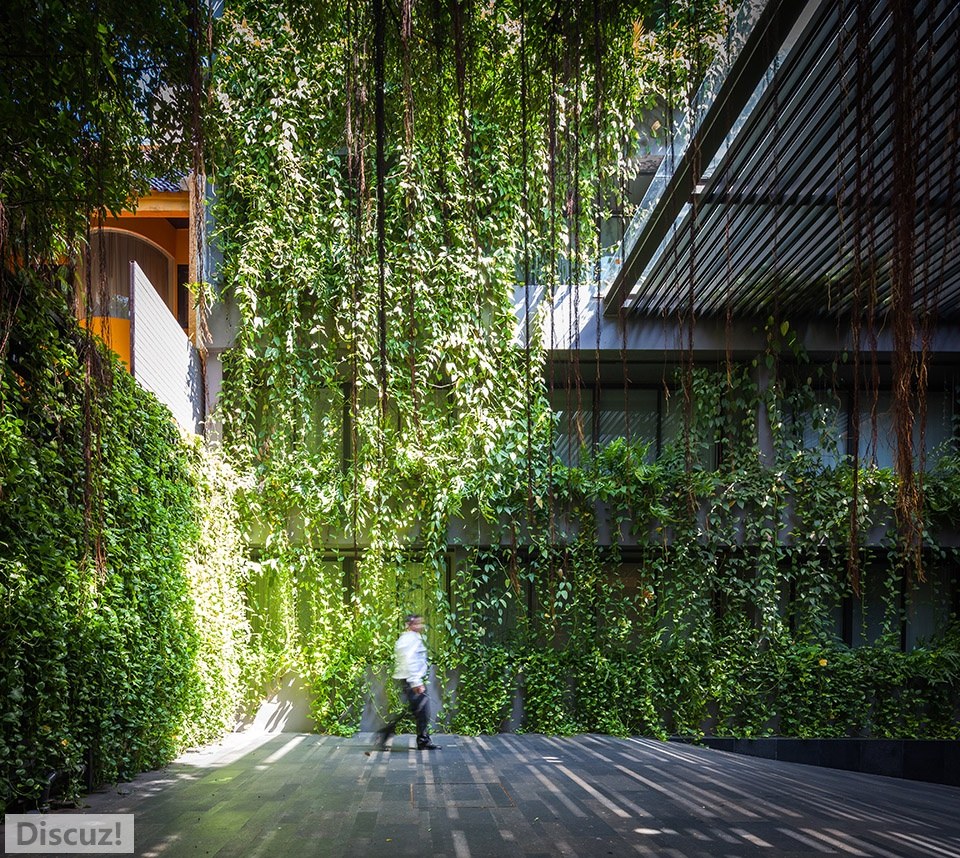 ▼为空间带来阴凉，provide shading for the space